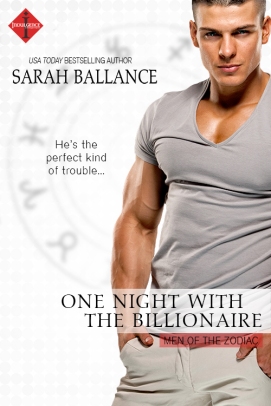 ONE NIGHT WITH THE BILLIONAIRE (Men of the Zodiac: Sagittarius)

He’s the perfect kind of trouble…

Zoe Davenport is on her way to a perfect, idyllic, private resort where there’s no ex-fiancé and definitely no public scandal involving said ex-fiancé. But one look at the exceptionally sexy resort owner, and Zoe wonders if she’s escaped scandal just long enough to land herself in even hotter water…

Except that Ryder Nash isn’t exactly a stranger. He and Zoe used to live next door to each other. She was the sweet little temptation who couldn’t stand him–the bad boy with a loud car and a new girl every weekend. What Zoe doesn’t know is that all those years ago, her father paid Ryder off…to keep him away from her.

She followed him along a beautifully tiled pathway. To one side, blooming hibiscus lent a shock of color to the crisp landscape. On the other, plush loungers surrounded a deep blue pool with what appeared to be a swim-up bar. Unmanned, of course, since the place hadn’t yet opened to the public. She could use a drink.

The room to which he led her appeared to be a cabana-style suite. The outside was starkly modern luxe, the full glass walls on the ocean side allowing an endless view of the water. An expansive open-air patio under a permanent roof hosted an entire living room set, complete with loungers and a private pool just steps from the Caribbean. Even through the glass, she could tell the kitchen, with its white cabinetry and gleaming gray stone countertops, would be completely at ease in a luxury apartment.

It wasn’t until he opened the door for her that she realized something was wrong.

The room—which hadn’t been locked—appeared…lived in. Not a mess by any means, but there were a couple of rinsed dishes in the sink. A mug on the coffee table. Shoes on the floor.

Where her mouth didn’t form words, her expression must have spoken volumes.

His lips twitched. “Your room is the one to the right. If your driver wants to keep his job, the rest of your bags are already inside.”

He straightened, all mass and muscle and sex appeal. He stared at her, one corner of his mouth upturned as if he found something funny. The Ryder she had watched through her bedroom window had never found anything funny. Not ever. He wore a scowl like no man’s business, but a smile? He’d be devastating in a smile.

“You weren’t expecting a room?”

Expectations. The thought took her in a direction she thought she had long left behind. One in which she had stared into those exquisitely blue-green eyes and had begged with every star in the sky for him to want her.

She tore her gaze from his lips. “I didn’t realize I’d be sharing.”

“I hate to break it to you, princess, but most of the rooms aren’t finished for a few days yet and are in the process of being painted. You can either asphyxiate on paint fumes, bunk with the guys in the staff quarters, or you can stay here.” His expression softened. “For what it’s worth, you have your own bathroom, and the locks are fully functional. You’ll have your privacy, and I don’t bite.”

“You?” She nearly swallowed her tongue. Aside the fact she had spent countless hours fantasizing about his teeth on her skin, and she had rather hoped he did bite, there was the very small matter of proximity. And that he had just indicated he would be a presence in hers. “I was under the impression I would be…working directly with the owner.” She had nearly forgotten her cover as an interior consultant. After ten years apart, the man managed to unravel her in minutes.

His lips formed a grin that didn’t quite reach his eyes. Was he as tormented as she? She doubted it, but it was a nice thought. “You can work as closely with the owner as you would like,” he said. “But if you want me out of here, you’ll be sorely disappointed.”

He smiled, all languid and sated. Post-coital. “No, sweetheart. I’m him.”

For more about ONE NIGHT WITH THE BILLIONAIRE and the rest of the Men of the Zodiac series from Entangled Indulgence, click here.