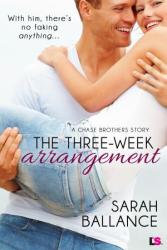 Now through April 1, you can enter to win a paperback copy of THE THREE-WEEK ARRANGEMENT, coming April 4 from Entangled Lovestruck. You MUST enter via Goodreads, and you can do so here. Want more about the story? Check out the blurb and excerpt below.

Have you enjoyed the Chase Brothers series? Please consider voting in the TRR Reader’s Choice Awards by clicking on the button above the title on EACH of the following books.

And if you enjoyed ONE NIGHT WITH THE BILLIONAIRE, be sure to check out the boxed set coming March 28. The entire series has been bundled. TWELVE full-length Entangled Indulgences for just 99 cents, and they’re all yours if you start by clicking here.

With him, there’s no faking anything…

Ethan Chase isn’t interested in dating. After losing the woman he loved more than life itself, he’d much rather ride solo, but his family is dead set on fixing him up. To get them off his back, he hooks up with ultra-adventurous, ultra-temporary adventure photographer, Rue Campbell. All he has to do is survive three weeks in her orbit and he’ll be single again, only without the pitying looks and pressure to move on.

Rue is literally counting the days until her plane leaves New York City. The last thing she wants is a relationship, but being Ethan’s pretend girlfriend can’t hurt, right? Wrong. With Ethan, there’s no faking anything–in or out of the bedroom. With the sheets burning hot and the clock ticking on their arrangement, Rue realizes she’s falling for a man guaranteed to derail her goals…and break her heart.

Related: Five Things I Love About You; For Seven Nights Only

The instant Rue hit the mattress, Ethan was there with her. Allowing enough distance to remove clothing nearly broke him, but none so much as the sight of her lying there, moonlight filtering through the open blinds, body open and receptive to him. A distant warning sounded, but he tossed it to the floor with his jeans and nudged between her legs.

He laughed, and it hit him how happy he really was. Happy. Fucking hell, why did it have to be with her? With the woman he knew he’d never have? And shouldn’t. He squashed the thought, grabbed the condom, and was buried between her thighs before the second thoughts hit. He rolled into her, feeling raw and wild as he surged deep inside her while she tore at the sheets, fisting them again and again. His name was a plea on her lips, her body a torrent of surrender when he planted his hands on either side of her head and drove hard, rocking the bed against the wall while she begged for more. Begged for harder. He didn’t know anything like it. Never had. And when she shuddered and seized beneath him, she took him with her, pleasure exploding into bright points of light that left him dizzy and lost.

Lost. Yeah, there was a word for it.

He managed to fall to the side, sweat drenched, chest heaving, world turned upside down. Again. His lips stung with her kisses, and his blood ran like hell through his veins.

He could chase that feeling every day for the rest of his life.

She turned her head and, looking at him across the pillow, smiled, so soft and sweet he ached inside. Then she curled her fingers around his and ripped out his heart.

“My mother?” she asked with a grin.

“No. The rush. The freedom. I envy you, you know. The world is yours, and I don’t think you’re afraid of anything.”

“But you know you’ll be okay.” And wasn’t that the damned difference? He squeezed her hand, then extricated himself from her touch and then her bed. She stared openly while he dressed, never once asking him to stay. That was who she was, though, and whether or not he appreciated it, he got it.

Not that it mattered.

She had a flight to catch.

He’d be better off to stop worrying about her and start figuring out how to get through the gala. Once that was over, he could go back to his safe, normal life. The one without the quirky, car-kicking brunette with the scary clown pajamas.

He’d be able to breathe again.

Whatever that was worth.