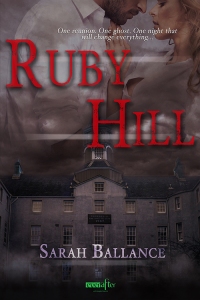 RUBY HILL released September 30 from Entangled Publishing’s Ever After line of supernatural novellas.

If you’re not familiar with my haunted asylum novella, RUBY HILL, let me give you the quick introduction. Ruby Hill is an abandoned lunatic asylum, very much patterned after those which came into vogue in the 1800s and subsequently became synonymous with overcrowding, torture, abuse, and neglect of the residents. These massive institutions exploded onto the American landscape, only to fall out of favor some 100 years later. Most were closed in the mid-1900s when mental health care was deinstitutionalized, but a few held on.

I say that to say this: RUBY HILL is not politically correct. Those of you familiar with the way these institutions worked won’t be at all surprised to learn that, but this will be news to some.

The truth is, institutionalized mental health care came from a good place, but quickly turned into a real-life horror story. There are some ugly references in RUBY HILL, but they’re all legitimate references to the reality of lunatic asylums as they existed in the United States.

My story picks up some thirty years after the Ruby Hill Lunatic Asylum closed its doors, but not even decades of abandonment can change the ugliness that existed inside.  And while the asylum in my story is fiction, the horrors are very much the truth.

And the truth isn’t always PC.

Click here to learn how to enter to win a $25 gift card and a gorgeous skeleton key necklace. Want to see it? Scroll down the page!

One reunion. One ghost. One night that will change everything…

From her earliest memories, Ashley Pearce has been drawn to Ruby Hill Lunatic Asylum, and she’s not the only one. Decades after the abandoned hospital ended its institutional reign of torture and neglect, something lurks in the shadows. Since she’s a paranormal investigator, it’s Ashley’s job to find out what.

Crime scene expert Corbin Malone doesn’t believe in ghosts. A born skeptic, he has no interest in entertaining the hype surrounding the mysterious deaths at Ruby Hill, but he won’t turn his back while more women die. He agrees to an overnight investigation, never expecting his first encounter would be with the woman he pushed away a year ago. But when he discovers Ashley is a target, he learns his greatest fear isn’t living with his own demons, but losing her for good.

Visions of the crime scene photos made an unwelcome reappearance in his mind’s eye. Young women—beautiful young women. Death hadn’t changed that. “In both cases, heart stopped. Sudden cardiac arrest. No known cause. No family history. No leads.”

She nodded, unimpressed. But then again, she subscribed to the boogieman camp. “So a ghost did it.”

He expected her to claim victory with that sentiment, but instead her words harbored bitter undertones. The shift threw him off balance. The whole damn place had that effect on him. The air felt as if it bred illness rather than oxygen—darkness gathering like rain clouds, too fat with their wares to find the sky.

He’d choke on the toxicity.

Is that what Cash had done?

Though the air boiled, inexplicable cold sluiced Corbin’s spine. He glanced toward a window. Dusty and broken, it had a morbid effect on the sunshine attempting to filter through from outside, where the world lazed deep orange. The thought of darkness on the other side made him shudder. When he turned to shut the front door, he realized the darkness on the inside was far worse.

Click here to enter to win this gorgeous skeleton key necklace and a $25 gift card.