Is there a better way to kick off the weekend than with SEVEN DIRTY WORDS? I don’t know about you but I’m all about giving it a shot! Let’s get to know our guest, Charlotte Howard, and her debut release, shall we?

Welcome, Charlotte! I absolutely have to ask about your intriguing cover. Are those unhappy tears, or is there something more behind her expression?

A bit of both.   Paige is overcoming a traumatic experience, and finds herself torn between two men who are completely different, and yet strangely similar.  She is also an active person and finds herself in lots of scrapes!  So the tears represent her pain physically, emotionally, and mentally.

And just like that … I’m hooked. Which one or two themes most accurately captures your story?

I’m not sure.  At the end of the day, it is a love story.  But it’s also about a young woman overcoming her fears and finding her inner strength.

It certainly promises to be a powerful story. What might readers be surprised to learn about the plot or characters SEVEN DIRTY WORDS?

Paige isn’t your usual heroine.  She comes from a wealthy and educated background, but doesn’t act on it.  She’s stubborn, living in a male-driven world, but trying to keep hold of her femininity.

I love how much conflict exists in that short description! Let’s have some fun with SEVEN DIRTY WORDS. What’s the first sentence?

“I died for a short while the first time we met.”

Oooh, that’s a fantastic line! What’s your favorite line in the book?

Probably that one!  I love the entire first paragraph.

*really wants to see the entire first paragraph* LOL! How about a brief excerpt?

“I tried to relax, I tried to enjoy the event, but I couldn’t.  My mind was racing, each thought hurting more than any bruise.  What had he meant when he’d said he knows of me?  Everything that had happened had been buried by my father.  I didn’t want to think about it.  I’d spent a year fighting those unwelcome thoughts.  Twelve months, three weeks and one day to be precise.

Danny whisked me into a swaying waltz as the string quartet played something classical, although there is no point in asking me to name the tune.  A tap on his shoulder stopped us.  “May I?”  TDS stood holding a hand out.  Danny looked at me, his gaze searching mine for permission to put him on his backside.  I shrugged and took the hand of TDS.”

Wow. I SO wanted you to keep going there. You have a great voice! Which scene of SEVEN DIRTY WORDS was most difficult for you to write? Why?

A particularly violent scene, where Paige is remembering what happened to her.  (I can’t say what because it’s all part of her mystery in the beginning of the book!!) She looks at it with a mechanical, robotic, POV.  It wasn’t really the writing that was difficult, but the research that went into it.  It was harrowing to say the least.

I can only imagine how it would be to research something horribly violent. 😦 Which scene would you most like to experience for yourself? From whose POV?

Ooh, now that would be telling!!  Definitely one of the scenes involving Vance Ellery (TDS).  Possibly from his POV.

That sounds promising! *grins* What inspired the title of SEVEN DIRTY WORDS?

The title came to me before the story.  I’d heard the saying “Seven Dirty Words” and thought it seemed like the title for a provocative romance.  I was shocked when I couldn’t find one!  Apparently they come from a list of words that were banned from radio and TV in the 70s.

I’m totally wondering which seven you had in  mind, lol. Would you make the same choice your heroine did?

If I’d been in her situation, then probably yes.

Now that we’re all completely mired in curiosity, LOL, one more question before we let you go. On what are you currently working?

I’m currently writing Four Letter Words, the sequel to Seven Dirty Words.  I also have a couple more plotlines in the works.

Those titles are beyond clever. Okay, let’s take a look!

Paige Holmes hides herself in a masculine world in a desperate attempt to remain safe. Just as she is ready to face her fears and her past, she finds herself torn between Matt Jackson and Vance Ellery: handsome, rich, and safe – or handsome, rich, and dangerous? Which will she choose? The one who appears to be the most perfect, or the one who makes her use all Seven Dirty Words? 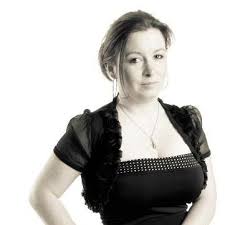 Born in Oman, Charlotte moved to the UK in 1989, settling in Somerset in 2008. She lives with her husband, two children, and growing menagerie of pets, and works as a makeup artist and a freelance writer. She loves learning new skills and keeping fit, always looking for ways to keep her brain and body active. Her career as a writer started at an early age when she began writing poetry, short stories, and flash fiction. “Seven Dirty Words” is her first published full-length novel.

Sarah here: Thank you all for joining us today! I hope you enjoyed this glimpse between the pages of SEVEN DIRTY WORDS. If you grab a copy, please be sure to leave a review. Charlotte, it’s been a pleasure, and I do hope you’ll return with FOUR LETTER WORDS! ;c)