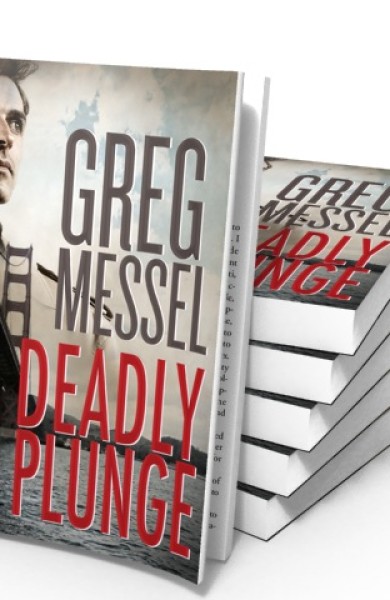 Former baseball player and newly-minted private investigator, Sam Slater is hired to find out why a rich, politically-well connected San Francisco man, Arthur Bolender,  suddenly ended his life by plunging off of the Golden Gate Bridge. All those who know Arthur say unequivocally that he did not commit suicide.  However, Bolender’s body was found floating in San Francisco Bay and his car was abandoned in the traffic lane of the bridge.  Meanwhile, Sam’s romance with glamorous TWA stewardess Amelia Ryan continues to blossom and deepen. She is now his secret fiancee. Amelia also eagerly helps Sam solve his cases when she’s in town. The key to unraveling the mystery seems to be a strange old Victorian-style house. Bolender’s widow, a rich, seductive socialite named Maggie Bolender, was not even aware that her husband owned the house. What is really going on behind the doors of the mysterious house?  Finding the answers will plunge Sam and Amelia into a dangerous world of political intrigue in the exciting sequel to “Last of the Seals.”

Wealthy and well-connected businessman Arthur Bolender has taken a DEADLY PLUNGE off the Golden Gate Bridge, and his socialite wife Maggie isn’t buying the suicide. Seems Arthur had plenty to live for, including Maggie herself, his former-secretary-turned-bride. She hires private investigator Sam Slater to get to the bottom of Arthur’s mysterious death, and she’s willing to do what it takes to get to the truth, though her style of “help” isn’t exactly to Sam’s taste—or to that of his secret fiancée, Amelia Ryan.

The investigation into Bolender’s untimely death quickly leads to the victim’s mysterious Victorian house—a second home of which Maggie knew nothing. A love nest? Probably not with Maggie’s photo by the bedside. The answer might be found on the locked upper floor, but their initial foray into the space only leads to more questions, and answers lie in pieces through broken corridors . . . and murder.

Set in late 1950s San Francisco, DEADLY PLUNGE exudes atmosphere. The story impresses with a cinematic feel, sweeping readers back in time to in many ways watch (rather than merely read) the play of events. This is aided, no doubt, by the black and white photos Messel includes throughout. Showcasing the very venues mentioned in the story, these images really bring the reader to terms with the book’s historical ties.

Though the landscape is thoroughly San Francisco’s, Russia and the Cold War play important roles in the plot, which is intriguing but not overly technical for those not already familiar with the history. The characters are infinitely likeable—perhaps with the exception of Maggie Bolender, whose slightly grating flirtation is one of many essential and nicely woven plot threads.

Likewise, Amelia ‘s stunning beauty isn’t just Sam’s weakness—it actually plays into the plot. As Sam comes dangerously close to the core of the international political intrigue around which the story builds, one man’s obsession with the lovely Amelia leads him to take matters in his own hands. With her life on the line, can Sam save her from the grip of a madman, or will the story take another deadly turn?

Packed with intrigue, DEADLY PLUNGE simultaneously manages a bit of an easy pace. The reader truly feels the pull of a less-complicated time, at least in theory. Because underneath the promise of a simpler—albeit much more stilted—world of 1958, Greg Messel brings to readers a new dose of reality: twisting, deadly, and shockingly found in one’s own back yard.

Please note: A complimentary review copy of DEADLY PLUNGE was provided by Pump Up Your Book tours in exchange for a fair and honest review.